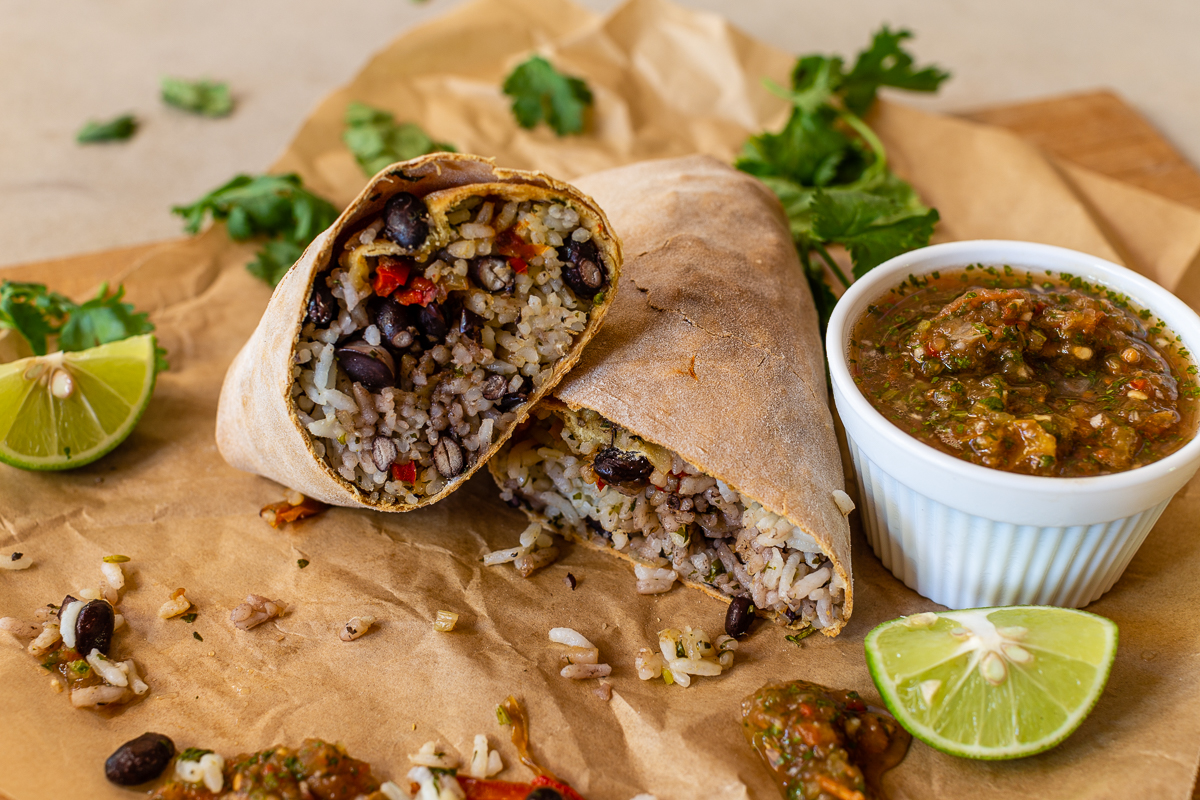 How do you get a restaurant worthy black bean burrito? The secret is mixing in cilantro and lime to your cooked rice. It is a little trick but adds a ton of flavor.

The great thing about this black bean burrito recipe is that you can add in more of what you love. If you love a meaty burrito, add in some meat. If you love fresh avocados, add in avocados. You really can’t go wrong.

You’ll just want to make sure to warm your tortilla in the oven for 10 minutes, so that the tortilla shell gets a nice crunch. And the black bean burrito is nice and warm. 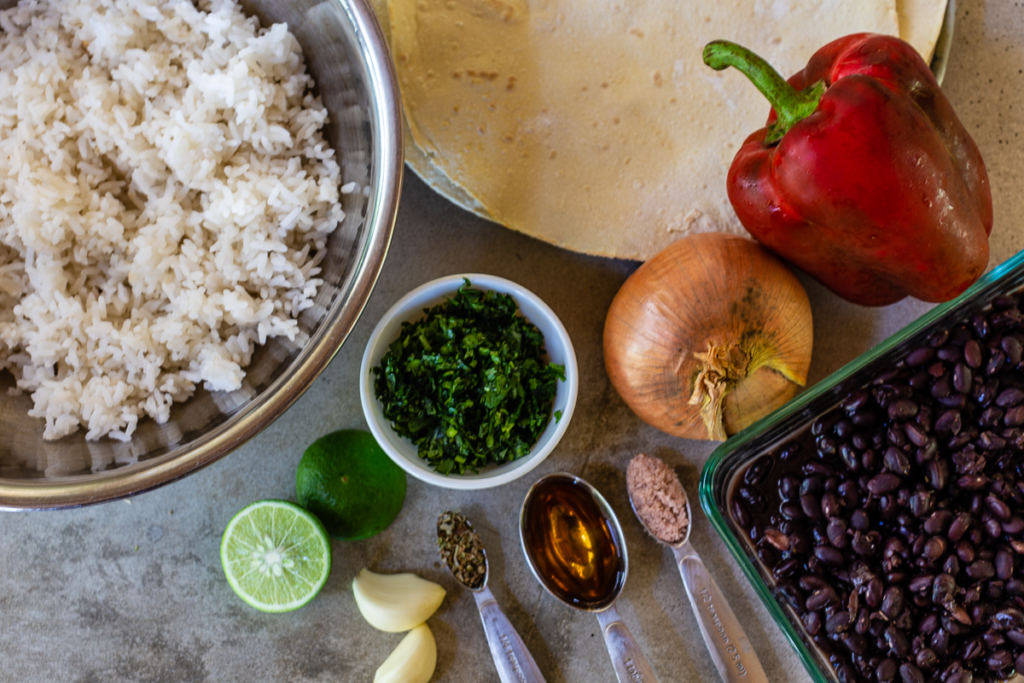 Let’s keep it simple with this black bean burrito recipe. The burrito is made up of:

You can make also make this recipe into a black bean burrito bowl. You’ll still get all the incredible flavors on top of lettuce greens.

HOW TO MAKE THIS BLACK BEAN BURRITO RECIPE 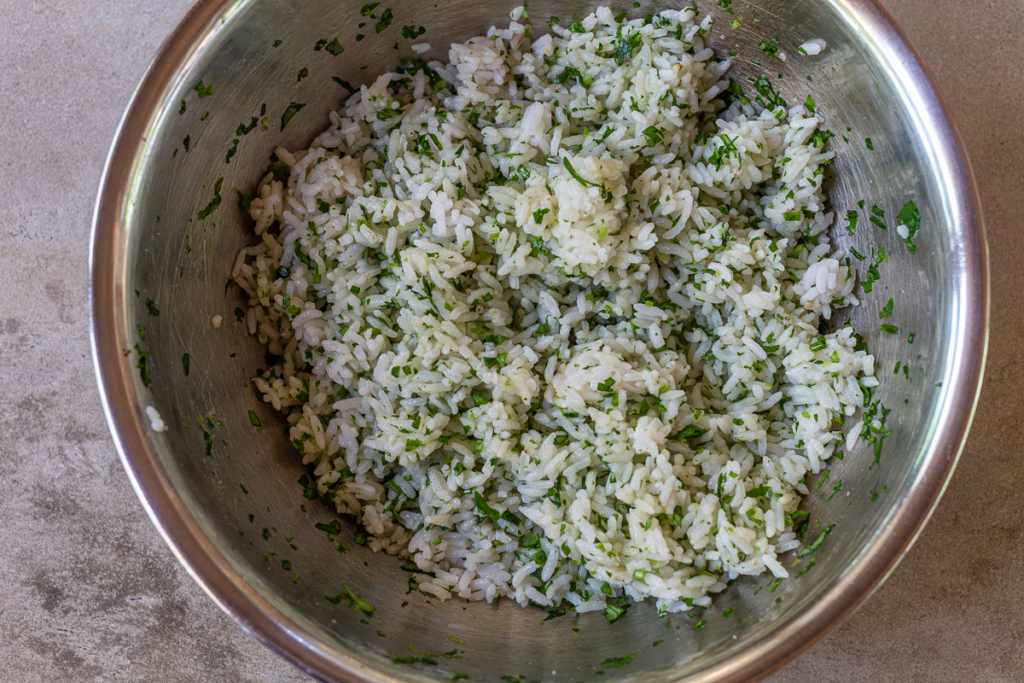 To make the cilantro lime rice, cook the white rice according to the package. Once the rice has cooked, remove from the heat and place in a mixing bowl. Add in lime juice, coconut oil, cilantro / coriander, and salt. Test taste and set aside.

In a separate mixing bowl, add the ingredients for the black beans and give it a stir. Set aside.

Heat a skillet to medium high heat. Add in coconut oil, bell peppers, and onions and cook until the onion is golden, about 5 minutes. Give it a stir. Then, remove from the heat.

The next step is to arrange and fold our black bean burritos. You’ll want to place the filling – rice, black beans, and veggies in a small strip in the center of the tortilla. You don’t need as much filling as you may think.

To fold the burrito, wrap the side closest to you and then fold over the remaining sides. You want the black bean burrito tight. Place the seam side down on a baking sheet. Cook in the oven for 10 minutes until the tortilla is lightly golden. 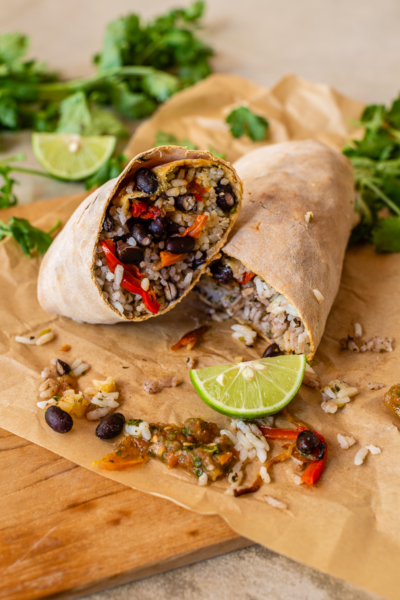 Once warmed in the oven, slice the black bean burrito in half diagonally. Enjoy with salsa and / or guacamole!

This black bean burrito recipe is on repeat in my home. When I find a good recipe, I come back to it again and make it about every 2-3 weeks. 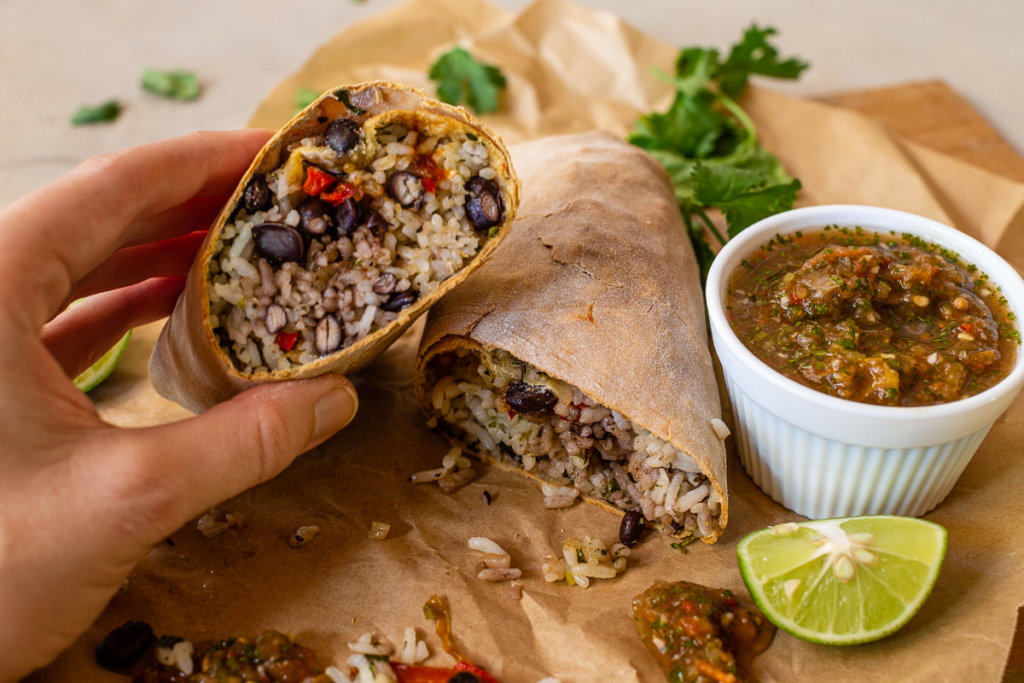 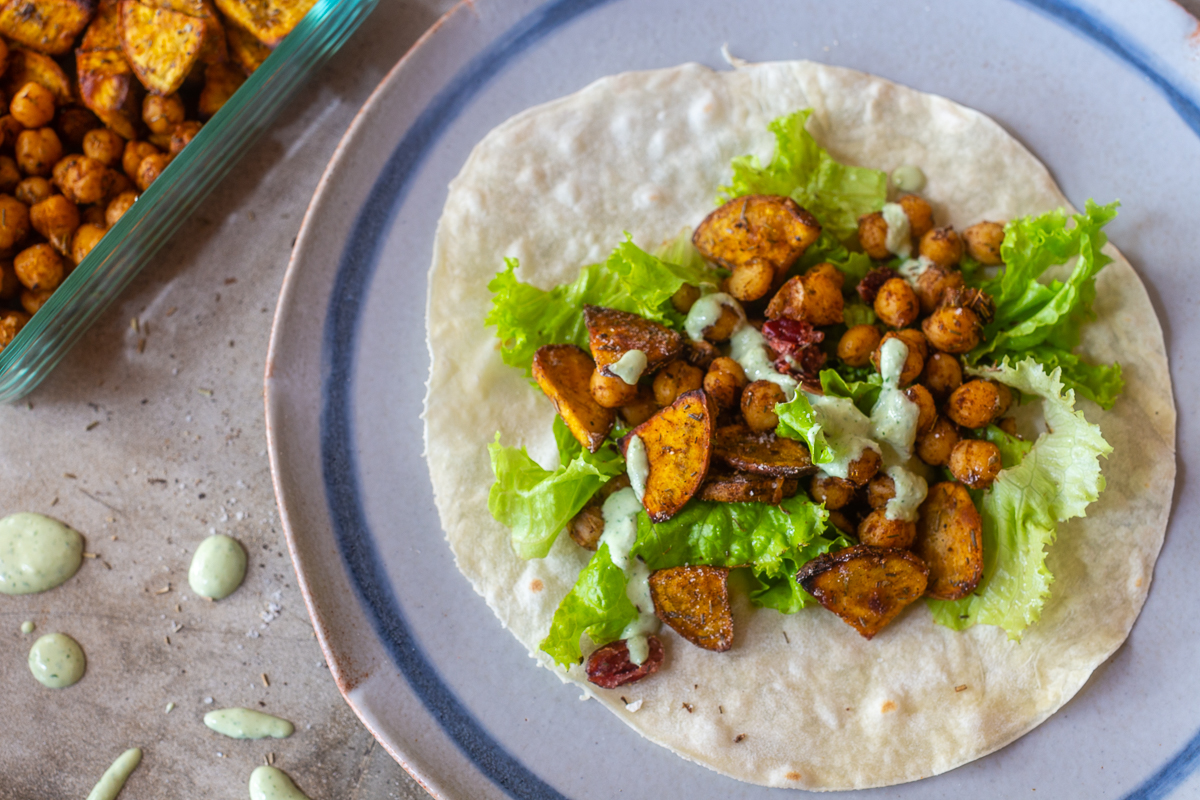 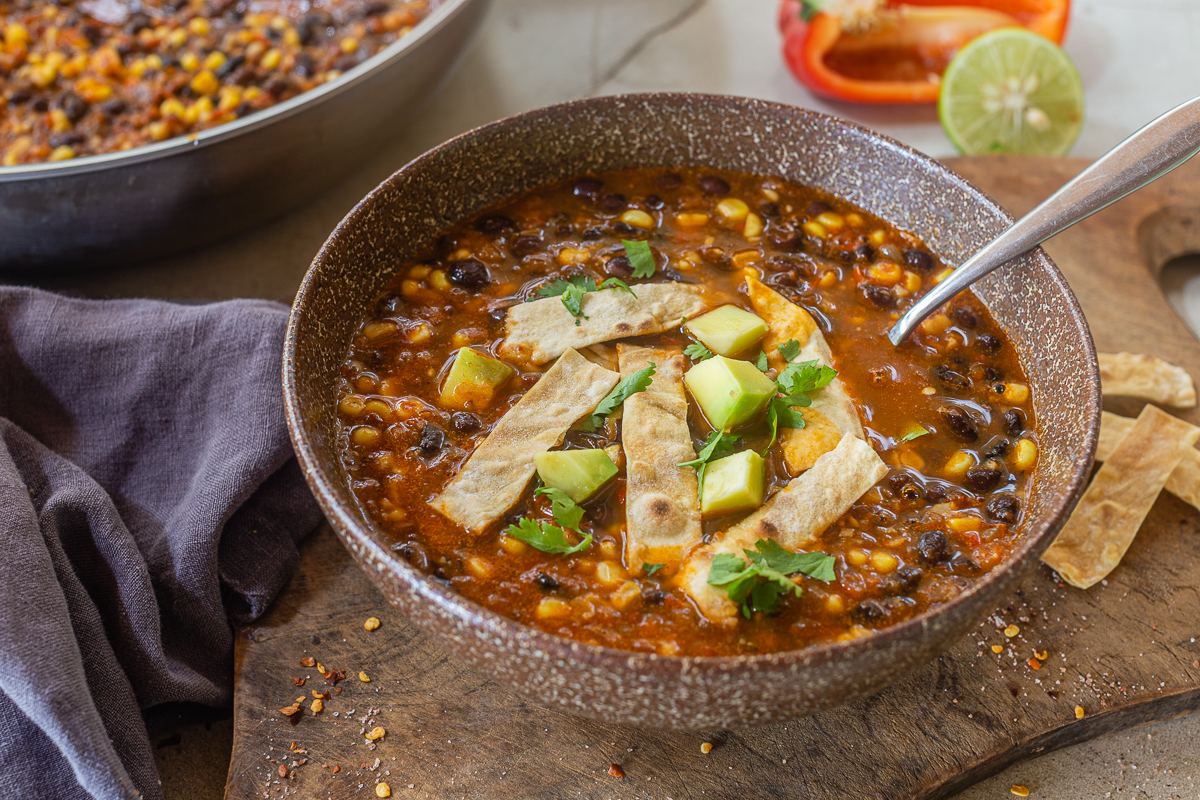 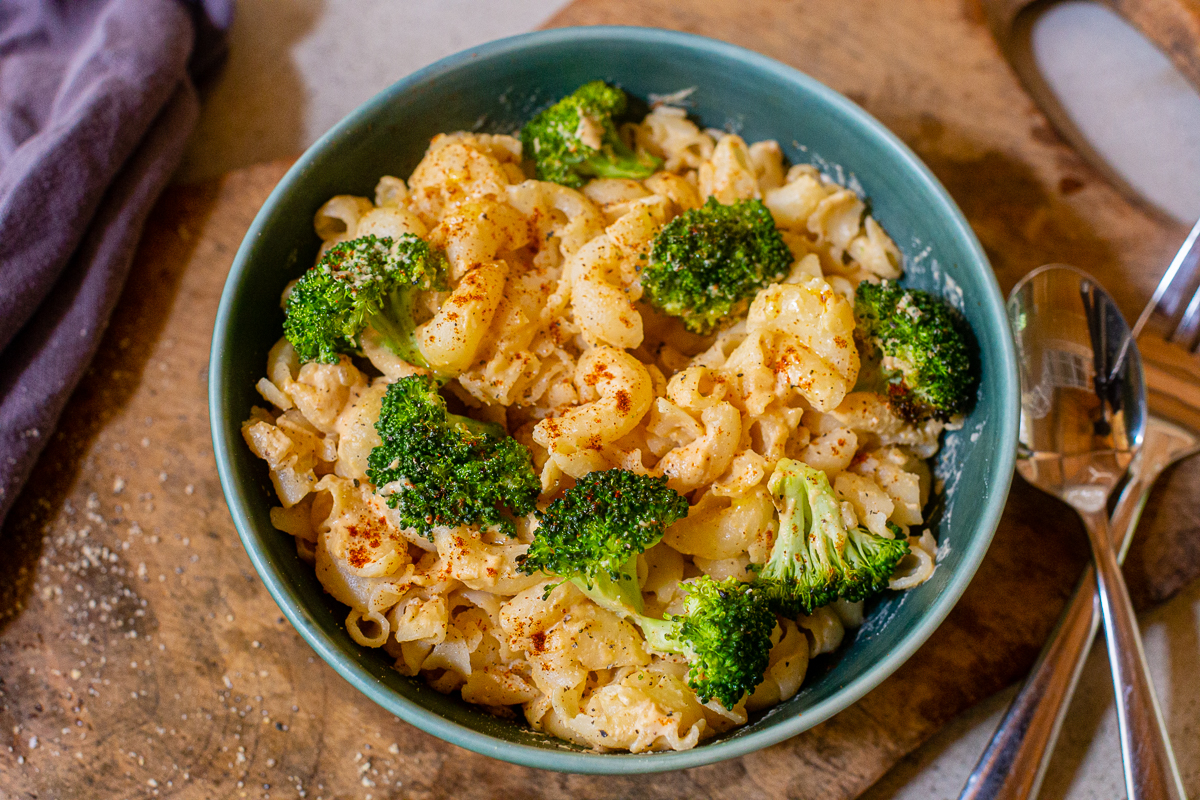 If you like this recipe, you’re going to love my healthy white rice recipe. It’s packed with colorful veggies – carrots, bell peppers, and jalapeños. It pairs well as a side to spicy food. 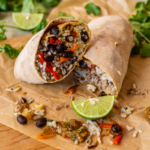 Feel free to add in meat - chicken, beef, or skirt steak. You can cook the meat when you sauté the veggies. To give this black bean burrito recipe a fajita seasoning flavor, you can add ground cumin, chili powder, garlic powder, and onion powder. Add the spices to the skillet and give it a stir. You can also make this recipe for black bean burrito into a burrito bowl and omit the tortilla shells.

Did you make this recipe?Tag @akindspoon on Instagram and hashtag it #akindspoon

Want to stop binge and emotional eating for good?

Get my 20 must-have recipes e-book packed with simple nourishing recipes you enjoy.